2015 Fighter of the year: Canelo Alvarez

In 2013, Canelo Alvarez, Mexico's biggest boxing star, turned back a stiff challenge from Austin Trout to win a decision and unify two junior middleweight belts but then lost them, along with his undefeated record, by decision to Floyd Mayweather in a fight that generated more money than any boxing match in history, other than Mayweather's fight against Manny Pacquiao in May.

Despite the loss, Alvarez had arrived as a money-making machine. The fight with Trout had drawn a crowd of some 40,000 to the Alamodome in San Antonio and Alvarez's presence in the fight with Mayweather was the major reason it generated around $150 million.

Alvarez would go on to headline smaller pay-per-views in 2014 against Alfredo Angulo and Erislandy Lara, doing solid business in the 300,000-plus buy range as he won both fights.

But in 2015, the 25-year-old Alvarez (46-1-1, 32 KOs), who signed an exclusive contract with HBO in late 2014, really came into his own both in terms of his ability as a fighter and as the face of boxing in the post Mayweather-Pacquiao era.

Alvarez not only showed he was one of the best fighters in the ring -- he won the lineal middleweight championship from a future Hall of Famer -- but also continued to show he is a financial rainmaker outside of it, the fulcrum on which so much boxing business rests, and that is why he is the 2015 ESPN.com fighter of the year.

"Canelo has been fighting for 10 years now, but he's still only 25 years old," Golden Boy promoter Oscar De La Hoya said of his company's most important fighter. "I think the best is yet to come with him. He has grown as a fighter every year, learning from victories and his losses. Legacy is important to him, and when all is said and done, I know he will be remembered as one of the best in the sport." 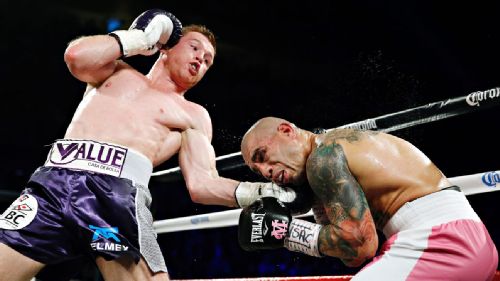 Alvarez, who won both of his 2015 bouts, opened his campaign on May 9 against power brawler James Kirkland at Minute Maid Park in Houston, where a raucous crowd of 31,588 watched as they engaged in a thrilling shootout, one Alvarez won by monstrous third-round knockout in a terrific performance.

Then Alvarez got a shot at middleweight champion Miguel Cotto, one of the best fighters of his time. They met on Nov. 21 at the Mandalay Bay in Las Vegas in a heavily hyped fight that delivered action and excitement and took its rightful place in the pantheon of the great Mexico versus Puerto Rico rivalry.

In the end, Alvarez, the first ESPN.com prospect of the year (2010) to also win fighter of the year honors, won a unanimous decision in another strong performance -- in the ring as well as at the box office, where it generated 900,000 pay-per-view buys, the first time a fight had done that much business without the presence of Mayweather, Pacquiao or De La Hoya since 2002.

And this could be just the beginning. Alvarez's fan base is as big as ever, so he could earn millions against lesser opponents but that's not who he is. He wants to please the fans and also test himself against the best. He has proven his willingness to do that by already facing Cotto, Mayweather and Lara, and 2016 promises more with an expected fall unification showdown against Gennady Golovkin.

"It's very important for me to fight the best because I want to cement my legacy," Alvarez said. "I came to this sport to fight the very best out there and that's a goal of mine.

"You'll get recognition by the fans, the media and the fighters themselves. Everybody knows my style of fighting and everyone knows that I love to please the fans in the arena and the viewers watching me on television." 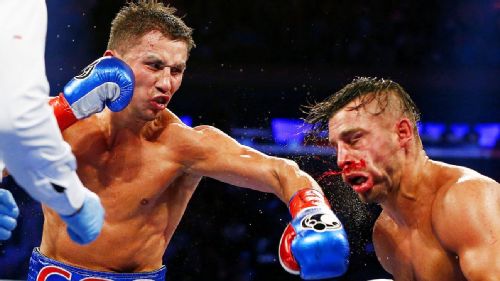 In 2015, GGG (34-0, 31 KOs) made three dominant middleweight title defenses (including unifying two belts) as he extended his knockout streak to 21 and moved to 15 consecutive defenses to pass Hall of Famer Carlos Monzon into second place for most in division history, only five away from tying the great Bernard Hopkins' record of 20 in a row. In February, boxing's good boy took apart longtime contender Martin Murray for an 11th-round knockout in a one-sided fight. In May, he took on tricky southpaw Willie Monroe Jr. and blasted him out in six dominant rounds. Golovkin culminated the year in October when he brutalized David Lemieux in an eighth-round KO to unify two belts and set the stage for a 2016 showdown with champion Canelo Alvarez. 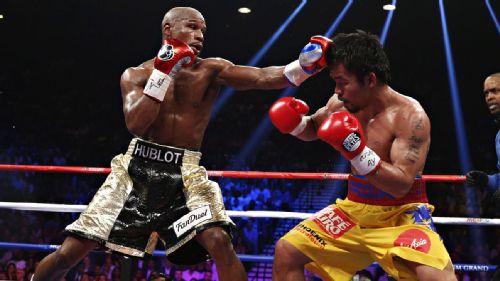 Mayweather (49-0, 26 KOs), the longtime pound-for-pound king retired from boxing (for now) with a perfect record having scored his biggest victory in 2015. After years of will-they-or-won't-they, he and Manny Pacquiao finally squared off in May in the richest fight in boxing history and one of the most hyped fights ever. It didn't come close to living up to expectations, but Mayweather did what he always does -- thoroughly outbox Pacquiao to win a decision as he unified welterweight titles. In his career coda, Mayweather took the path of least resistance and ran roughshod over Andre Berto for the completely expected easy decision in what he said was his career finale. 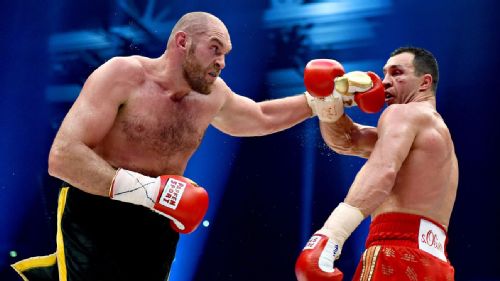 In February, British big man Fury (25-0, 18 KOs) scored an eighth-round knockout of Christian Hammer in a tune-up fight for his mandatory shot at heavyweight champion Wladimir Klitschko in November. Forget the Hammer fight though. Fury makes the list because despite it being a dreadful fight in which neither man looked good, he won the heavyweight championship from Klitschko by unanimous decision in the upset of the year. Fury's victory ended Klitschko's 9Â½-year title reign (second-best all time) and stopped his defense streak of 18 successful defenses in a row (third-best all time). 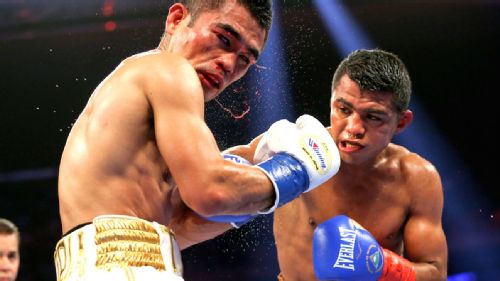 Reigning flyweight champion Gonzalez (44-0, 38 KOs), a former strawweight and junior flyweight titleholder, enjoyed a breakout 2015 in which the all-around talented "Chocolatito" went from hidden treasure known in his home country of Nicaragua, Japan (where his promoter Teiken is based) and to the most ardent fans to the universally recognized pound-for-pound king following Floyd Mayweather's retirement. That recognition was due in large part to Gonzalez's first wide U.S. exposure on HBO, where he appeared on two Gennady Golovkin undercards in sensational performances. In February, in a nontitle fight in Nicaragua, Gonzalez crushed journeyman Valentin Leon in three rounds. Then he scored two impressive wins in title defenses, in his HBO debut against former junior flyweight titlist Edgar Sosa, whom he obliterated in two rounds in May, followed by a one-sided ninth-round thrashing of former unified titleholder Brian Viloria.