After role in 'Creed,' Gabriel Rosado returns to the ring for real fight

Middleweight contender Gabriel Rosado has long personified the reputation that comes with being a Philadelphia fighter.

Rosado (21-9, 13 KOs) is tough and fearless and has persevered through a challenging career. Not only has he overcome a string of hard-luck defeats, mostly because of cuts, he has long navigated the rough waters of boxing politics by himself as a self-managed fighter.

Let's just say there has always been a bit of Rocky Balboa in Rosado, 29, who like the fictional movie character proudly calls Philadelphia home.

So when Rosado moved to Los Angeles nearly two years ago to chase the acting bug, it's almost fitting he landed his breakthrough role alongside Sylvester Stallone in the newest chapter of the "Rocky" series.

Rosado plays the role of light heavyweight fighter Leo "The Lion" Sporino in the movie "Creed," which was released on Nov. 25 and has been well-received by boxing and movie buffs alike. He joins fellow professional fighters Tony Bellew and Andre Ward as actors in the film.

Sporino serves as an opponent for the movie's lead role, Adonis Creed -- played by Michael B. Jordan -- who is the son of original Rocky antagonist Apollo Creed.

Rosado, who returns to the ring on Dec. 19 against Joshua Clottey in Verona, New York, recently spoke with ESPN.com about his experience making the film.

What has the buzz been like since the movie was released?

It's great. It's definitely great to see all the good publicity and just being part of a great movie that is doing pretty good numbers. I think it's even better than the first "Rocky" in terms of the first week, so I'm just happy to be a part of it.

What was your reaction to seeing the film for the first time? 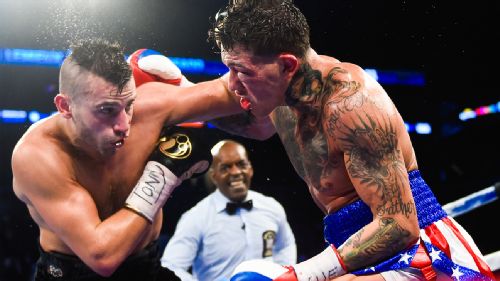 When I first saw it, I didn't really know how much TV time I was going to get or whatever. But I think I'm really proud and happy with the role they gave me. I'm definitely a big part of the movie, so I'm definitely proud of that. I think it's a great movie. When I first saw it I thought it was amazing. All the fight scenes are still like the best ever in a boxing movie. I think that made the movie realistic for anyone that knows boxing. It's not a movie where you watch and think it's phony or fake. Even with the storyline and everything the fighter has to go through it was good all the way around.

In your opinion, where does "Creed" belong in the overall "Rocky" rankings?

I actually think it's as good as the first one. It's really good. The first one stands alone because it's a classic and no other movie had ever been done like that. But I put this one right there with the first "Rocky."

You have a unique look and have built a reputation as a tough fighter. What do you think this role will do for your name?

I'm definitely getting a different type of following. Many of the people didn't even know I was a boxer and just saw the movie. But I'm getting a lot of positive feedback. I moved to Hollywood to get involved with acting, so being in this situation is definitely good, and I think it's something that will open doors for new opportunities. I kept a lot of great relationships with people in the business. I stay in contact with Stallone, and he helps me. He guides me with things like production and things like that. It's definitely a great thing.

What have you learned from working with Stallone?

He's just so down to earth. A lot of people who are as big as Stallone, sometimes they are full of themselves. But he's not that type of guy. He's really humble. He's a big fan of the sport, and he definitely respects it. He knew about me and had seen my fights. He's a really good friend, and his brother Frank is a cool guy, as well. They are both really good to me and have helped me out and given me direction. So I'm just happy to have gotten to know them.

What's the biggest adjustment you had to make while adjusting to being an actor?

Stallone told me to do every scene like it's your last because you never know which scene they are going to use. As far as the physicality and scenes of that nature, I don't think it was too difficult because I'm already a fighter. But the fake fight scenes definitely take talent. It's choreographed, and you have to fake getting hit. It's definitely a skill. I don't think it's something that everybody can do. But mentally I was ready for it. I didn't just go to Hollywood thinking I would get into some movies. I went to Hollywood and picked up an acting coach. I took it serious, so I think that helped going into the movie.

Did you and Michael B. Jordan end up exchanging any stiff punches for the sake of realism?

When we did choreographed scenes, there were times when we would let one slip. He would catch me or I would catch him, but it was all good. No one really got hurt. But he's definitely an athlete. He took the role serious and got in good shape.

Playing the role of a boxer was a natural transition for you. But how important will it be for you to evolve and seek a variety of different roles as an actor?

Absolutely, I definitely would like to take it to that point. I think with "Creed," I think it definitely opens doors for that. I think I have a unique look, and I just built a lot of relationships in Hollywood, as well. I think the future is bright. If I can keep the momentum going with a big win against Clottey, I think it will keep the buzz going. Everybody likes a badass, so I think there's a place for me in Hollywood.

How do you balance between seeking acting roles and looking for fights moving forward?

I feel that things are pretty much playing out perfectly right now. The movie is out, and then I'm able to do training camp now and be 100 percent focused on that. I think it's good that the movie and the fight are so close. It keeps the momentum going. I think it's important for me to win in order to keep that momentum going. I'll fight two or three times a year, so in between I could see myself balancing it out. I would never allow anything to interfere with the fight, because boxing is a sport, but it's not a game. It's not something you can do and then put it to the side. You have to do boxing 100 percent. I would never put myself at risk and overload myself.