Billy Joe Saunders says the shame of losing the first all-gypsy world title fight will be added motivation ahead of Saturday's fight with Andy Lee.

The challenger from Hatfield feels his reputation within the traveller community -- no matter what he achieves in his future career -- is on the line when he faces WBO world middleweight champion Andy Lee at the Manchester Arena this weekend.

Irishman Lee (34-2-1, 24 KOs) will be making the first defence of his title in a fight that has twice been postponed. It was first moved from September 19 after Lee fell ill, then from October 10 after Saunders (22-0, 12 KOs) was cut in sparring.

Saunders has only had one bout -- a fourth round stoppage of journeyman Yoann Bloyer in July -- since his impressive points win over fellow Englishman Chris Eubank Jr just over a year ago. The 26-year-old admitted the prolonged wait for his fight with fellow traveller Lee has been frustrating, but has not diminished his appetite for the clash.

"I wasted a lot of time on the rematch with Eubank, waiting for it, and he never signed for it and we went our separate ways, but now I've got a world title fight, so it has worked out alright in the end," Saunders told ESPN.

"I'm sick of press conferences, I'm sick of talking about the fight, I just want to get in there and find out who the best man is."

Saunders, who races horse and carts down dual carriageways in Hertfordshire in his spare time, feels his fight with Lee is not getting the publicity it deserves because the pair are both from the traveller community, and claims some of the criticism of world heavyweight champion Tyson Fury has been tinged with prejudice.

"It's two travellers against each other and it's a very serious thing," Saunders said. "There's no place in our community for the loser, he will just be known as the loser, so it has been easy for me to get into shape because I know what's in front of me. 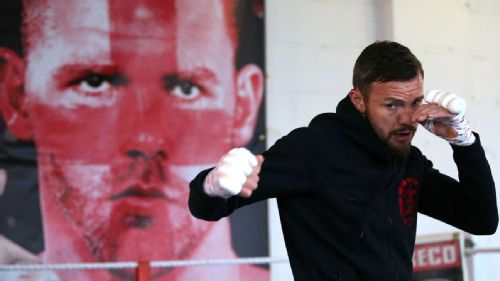 "I don't think me and Andy will get the publicity we deserve either because of our background. We are raised to do this in the travelling community. If you don't have a proper education this [boxing] is our life. This is our No.1 sport -- we are bred to fight.

Saunders has won European, British and Commonwealth titles and insists he is not concerned about Lee's punching power, which has seen him stop four of his last six opponents.

"I'm pleased to be on his platform, it's going to be the biggest night of my life," Saunders said. "I've never been this fit and I'm ready to go to war.

"His punching power doesn't bother me. I know he has a big reputation for knocking guys out and it saved him against Matt Korobov, but I'm not going to be one of them."

Lee, 31, expects to remain champion after two postponements and set up a clash with world No.1 Gennady Golovkin, the Kazakh knockout machine.

"I've been living out the dream I've had as a kid, to be world champion, and I'm not going to give it up easy," Saunders said. "I don't think he will be better than me because of the way I've trained and the way I'm feeling. I don't feel anyone can beat me right now."

On the same bill this weekend, Liverpool's WBO light-middleweight champion Liam Smith faces Jimmy Kelly, who was a surprise opponent for the Liverpool boxer's first defence. Kelly is little-known but Smith hopes to get the job done and move on to big name opponents.

"I have big ambitions and I'm not going to be foolish to overlook the threat he will bring," he said. "There are some major fights for me if I come through this one and certainly Miguel Cotto is right up there as one of the names I want to face.

"Cotto's been a great champion and to share the ring with him and beat him will take me to that next level. I definitely believe I have what it takes to overcome him because my style would cause him some big problems."