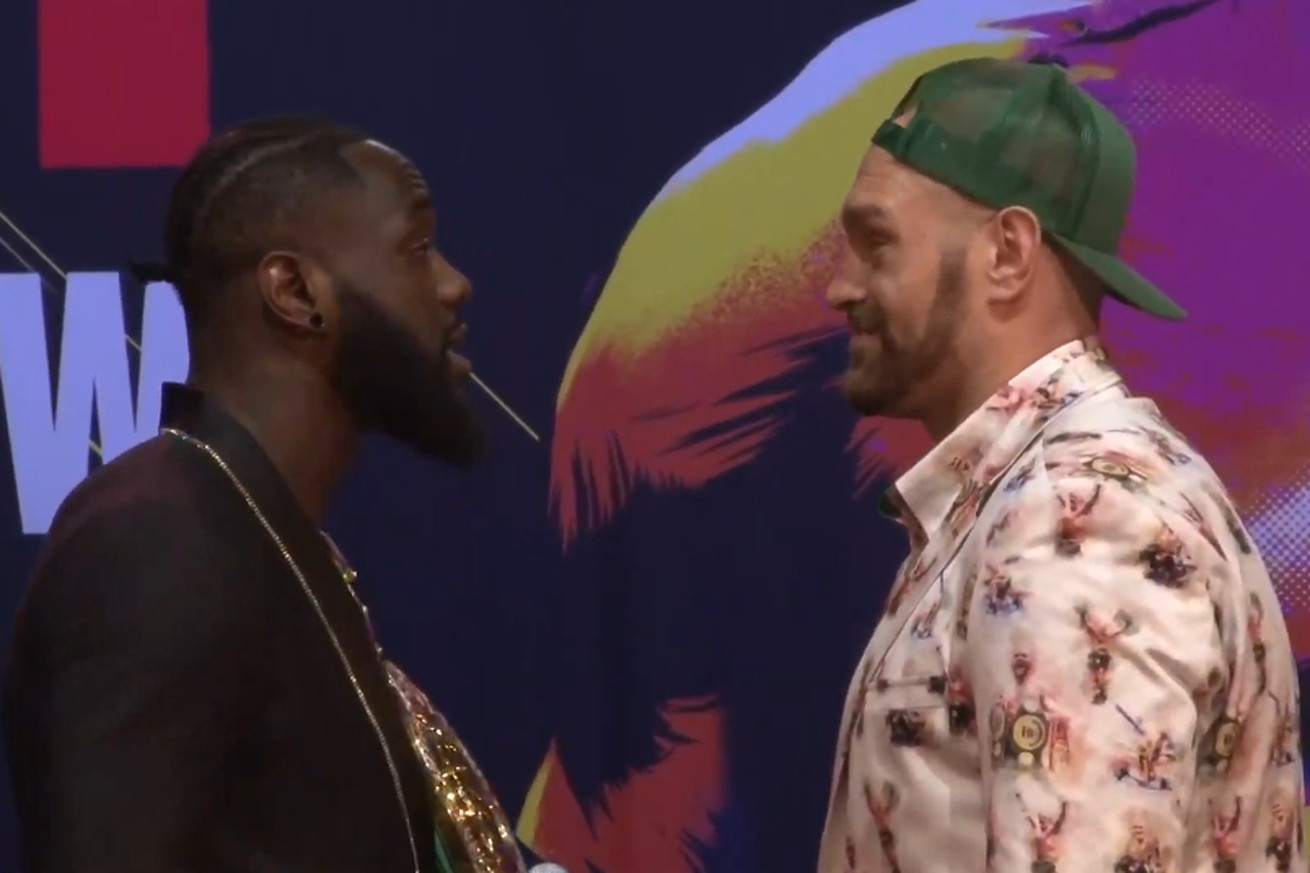 The biggest fight currently on boxingâs schedule is coming in just six weeks.

Deontay Wilder and Tyson Fury met up this afternoon in Los Angeles to trade some words about their Feb. 22 rematch, which will air on FOX pay-per-view and ESPN+ pay-per-view from Las Vegas.

Fury (29-0-1, 20 KO) made a big entrance for a press conference, bringing his own tall chair and unceremoniously discarding the folding chair put out beforehand. Wearing his usual loud suit and a backwards baseball cap, the self-styled âGypsy Kingâ talked up the fight, but admitted itâs not a fight that needs a hard sell.

âI canât remember a bigger heavyweight fight in a long time,â Fury said. âMaybe Lennox Lewis vs Mike Tyson was the last big, big fight like this. That was the last US-UK showdown. I donât need to sell this fight. People know what theyâre gonna get. Youâre gonna get a good fight.

âI think the sense is he either knocks me out or I win on points. Usually when people have that opinion, it usually goes the other way around. So expect Wilder to come out boxing for a points victory and me to come out bombing for a knockout.â

The two had a rematch ordered by the WBC in early 2019, following their controversial draw in Dec. 2018, but Fury wound up signing with Top Rank and foregoing the rematch at that time. He said Wilder (42-0-1, 41 KO) has avoided his messages since then, and even tried to avoid doing a press conference.

âHe tried to keep his distance,â he said. âHe didnât want to be around me, in case I got in his head. But thatâs all bullshit. âIâm living in his head rent free,â youâve all heard that said, but at the end of the day itâs just talk. It doesnât really matter what I say and what Wilder says. It all matters what happens on the night. Whatâs going to happen is Iâm going to get what I won last time: Iâm going to get the green belt and the Ring Magazine (belt), and Iâm going to keep my lineal championship.â

Wilder brought up Furyâs appearance last year for WWE, and promised a knockout.

âI knocked him out the first time,â he said. âI told Fury two years ago I was gonna baptize him, and I did just that. Rising up is part of the baptism. But this time around, itâs a different story. Itâs called unfinished business. This time around he wonât get up. And since heâs in WWE, Iâm gonna knock him out of the ring. And who knows, I might go up to the top and come off with a flying elbow kick.â

The WBC titleholder also isnât big on Furyâs âlineal championâ claim, and doesnât sound interested in claiming it for himself with a win.

âHe has a lineal title, something thatâs make believe and fake,â Wilder said. âBut Feb. 22, that lineal bullshit ends. He needs validation from the people. Some type of inspiration and motivation to feel like he beat me. He knows he didnât. And if so, why so many trainers? Heâs rotating trainers like he do his drawers. Firing, hiring. I still have my old trainers. I got the same people. You donât see me firing no one or bringing no one on. Heâs supposed to be this great fighter and Iâm supposed to be this guy who has no skills. When you have power, thereâs no way around it. You canât prepare for that.â

Wilder ended his opening statements with another promise of violent victory.

âThis is a new beginning right here. This is unfinished business that I will finish. Iâm going to knock him out. Iâm the lion, Iâm the king of the jungle. Come Feb. 22, Iâm gonna rip his head off his body. Remember I said that, Iâm gonna knock him out of the ring and give him a WWE moment in real life. Iâm glad heâs got a second job, heâs gonna need it.â

During the Q&A session, Fury promised to meet Wilder in the middle of the ring and trade shots, telling Wilder, âYouâre going to sleep in two rounds. Thatâs all Iâm looking for, one big right hand, nail Deontay Wilder, goodnight. I ainât coming here for a points decision, Iâm coming here for a knockout.â

âThatâs what he believes in his heart,â Wilder responded. âSpeak it, believe it, receive it. The magic of it all is the belief. But Iâm a realist. He knows what happened. He knows heâs going in there again with this monster. Itâs not an act. Itâs something I do every time out. Every guy Iâve faced, Iâve put âem down. I provide a service with my greatness. Itâs gonna be a beautiful moment in time for me, but not so pleasant for him.â

At the end of it all, after a bit more face-to-face trash talk, the two confident fighters shook hands and parted ways. They meet again in just over a month.